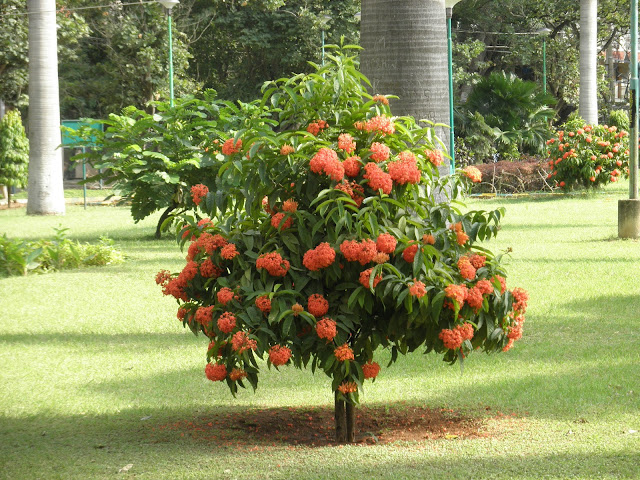 This Sunday morning found us in Lalbagh, Bangalore's central garden space. I loved the wide paths and the grand old trees and the many flowers. Though i am told that it is a lot greener later in the year, after the rains. Spread over 240 acres, it was concieved by Mysore's ruler Hyder Ali in the eighteenth century and later developed further by his son Tipu Sultan and the British. Here are my pictures, i'll write more about individual trees in the days to come.

As some of you regular readers might have noticed, these days i am spending an inordinate amount of time peering into the ground, trying to identify the 'weeds' and observing the lives of the ants and bugs that live amongst them. It is a fascinating world!! I am truely wishing i could spread a carpet by a tree and spend a few hours merely observing what all the little creatures get up to.

And quite coincidentally, i also stumbled upon another excellant blog carnival on the web, as i was going through the regular editions of the festival of the trees, circus of the spineless and the fascinating house of herps, that i hope to host later in the year. It is called "an inordinate fondness" and i'll paste below what it has to say about itself-

Taken from "An Inordinate Fondness":

When asked by an English cleric what his studies of nature’s diversity had taught him about the Creator, 20th Century British geneticist and noted evolutionary biologist J.B.S. Haldane reportedly quipped, "He has an inordinate fondness for beetles." While there is some uncertainty whether Haldane ever actually spoke these words, no one can argue with their truth.

In fact, nearly half of all insects and one quarter of all described living species are beetles—350,000 and counting. They occur in virtually every habitat imaginable and exhibit innumerable, often brightly colored—even iridescent—and architecturally elaborate forms. Their impacts on humans are also many, not only as pests and beneficial organisms, but also as cultural symbols and objects of passionate scientific and philatelic interest.

An Inordinate Fondness is a celebration of beetles—of their indescribable beauty, amazing forms, and astonishing diversity. We hope you will join us in this celebration every month, as we highlight the best that the blogosphere has to offer on this fascinating group of animals.
2 comments:

Labels: . an inordinate fondness, . circus of the spineless, . festival of the trees, . house of herps 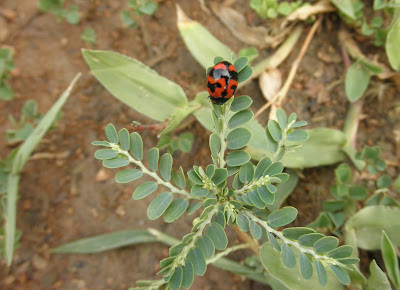 I thought lady bugs had perfect dots, but i recently came across this one that had a really interesting pattern on its 'back'. i wonder what it is - a lady bug? or something else?
May 23rd 2010 update: From a member of the Madras Naturalists Society:
You're right, this is a lady beetle....it's called a Transverse lady beetle (Coccinella transversalis). From my experience, I believe this is the most common species in Chennai, even though it is actually native to Australia. Anyway, most of the lady beetle species do NOT have perfect spots- that misconception arose from the popularisation (if that is even a word) of the common British and American Coccinellids through artwork, etc
This post was submitted to AIF#5 and COTS#51. Hop over and check them out!!
2 comments: 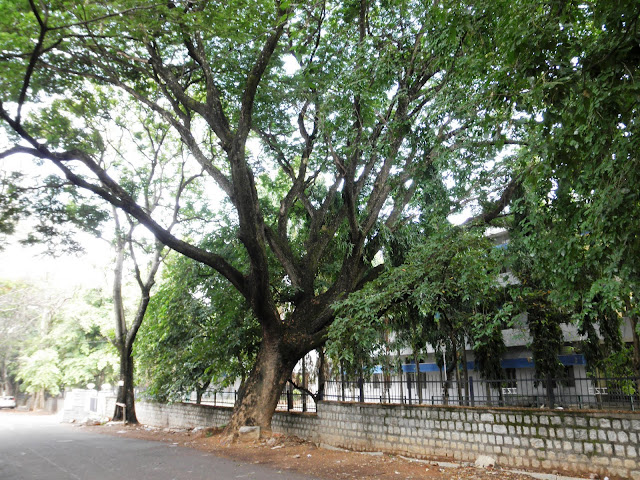 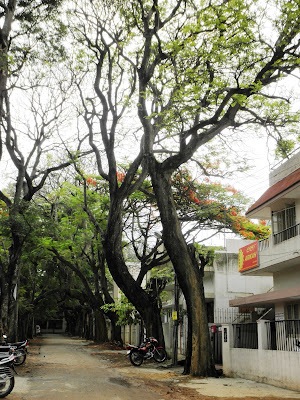 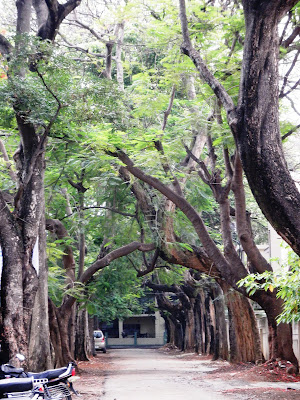 I came across a beautiful patch of coat buttons (tridax procumbens) over the weekend.

Did you notice the little blue dots in the pictures? No? take a closer look ... 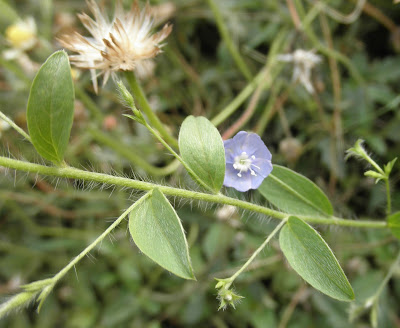 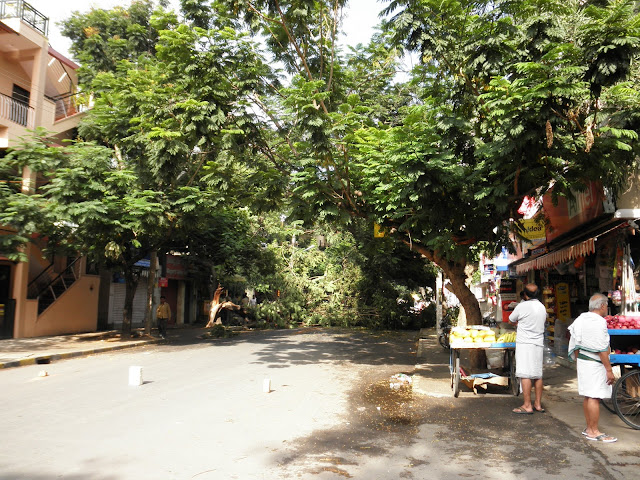 I was saddened to see a tree fallen in my neighbourhood this morning. Cutting off the branches of trees on one side alone (often times to make way for a building) destroys the natural balance of the tree, making it weak in the face of heavy rains or winds. I seldom see a tree these days in the city that has been allowed to grow as per its natural branching strategy. One sided trees, sadly, seem to be the norm. 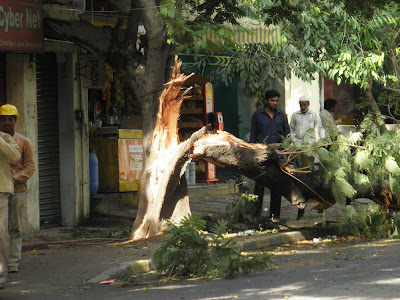 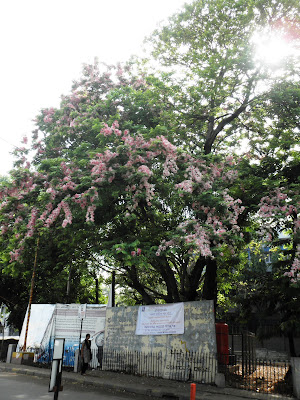 The beautiful cassias are abloom, bunches of pinks and yellows adorn the branches.
2 comments: 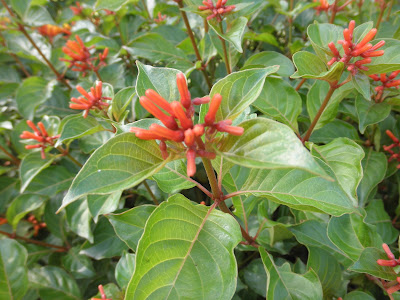 Red flower bunches with red stems, whorled leaves, green -> yellow -> red -> black berries
Thats right, it is the showy scarlet bush or fire bush, the second of the 'hedging material' i was introduced to recently.
I learned that it is of the same family as the coffee (rubiaceae). Now i wonder what the flowers of the coffee plant are like? I must remember to observe when i visit the nearby coffee plantations in coorg and chikmaglur. 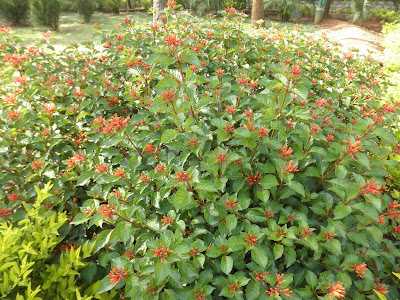 This is the first of two 'hedging material' i had the pleasure of seeing recently. The sky flower or duranta erecta has pretty little lavender flowers. Some of the petals have a deep line in the center. Take a close look if you pass by one, the colours are very interesting. 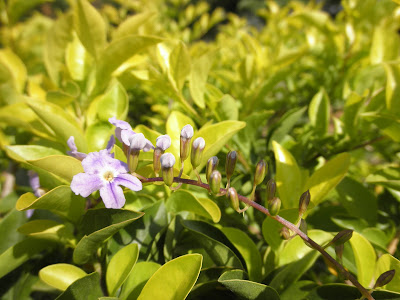 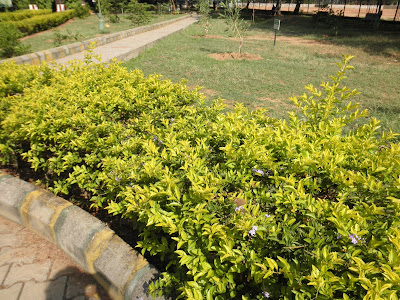 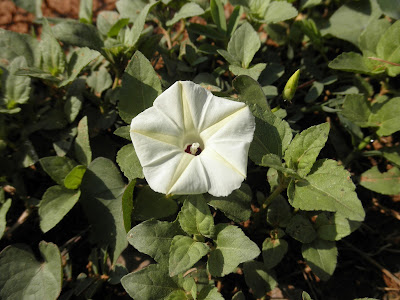 My obsession with the little creatures, flowers and plants on the ground, barely visible to us, continues... and with such wonderful results! I stumbled upon this tiny white-yellow beauty, with a really deep purple throat. Beautiful isnt it?! Let the picture not fool you, it is really tiny, just a little bigger than your finger nail perhaps!
I knew immediately that it was one of the morning glory family (convolvulaceae), and indeed it is. Flowers of India, that wonderful site that has come to my aid many a time when trying to identify a flower or a tree, identifies this as the Obscure morning glory, or the Ipomoea obscura. (remember the railway vine/beach morning glory, also an Ipomoea ?) I do need to go back and take a closer look at its leaves though, they are supposed to be heart shaped... I see one or maybe two of that shape in the picture above and think the others are those of another 'weed', interwined... or perhaps they are young leaves that are yet to take shape? a closer look should reveal all...
1 comment:

My entries to this month's festival of the trees could not have been more appropriate - colours of the trees go perfectly well with the hosting blog - Jasmine's nature's whispers. If you havent already visited, do so! Jasmine does some wonderful things with natural dyes. I particularily love Jasmine's profile picture - a captivating blend of nature and art.
No comments:

Labels: . festival of the trees

Last weekend as i strolled through the neighbourhood park, i found myself inclined towards looking at all the little things ... the insects crawling on the ground and the many "weeds" that competed with each other for space. There is so much beauty and diversity among these often unnoticed elements of any open space. Take for example the cinderella weed .... perfect little sunflower like flowers (no wonder here, it does belong to the Asteraceae - the sunflower family), each no bigger than the nail on your little finger! I wonder why this one, uncermoniously called the 'pig grass' is not used for lawns? It forms a great carpet and no one would ever want to walk over its pretty little flowers, would they? Does it spread a lot faster than common grass ? Does it eat up a lot more nutrients? 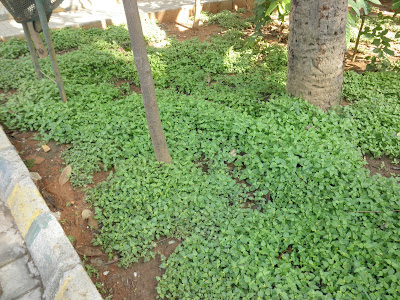 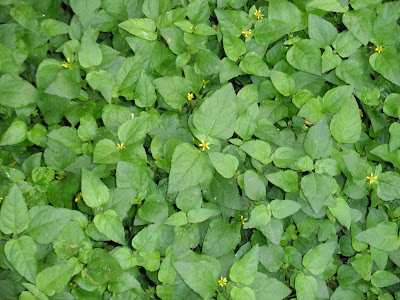 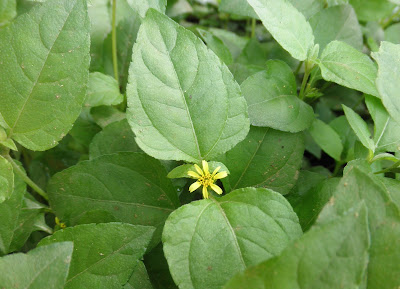 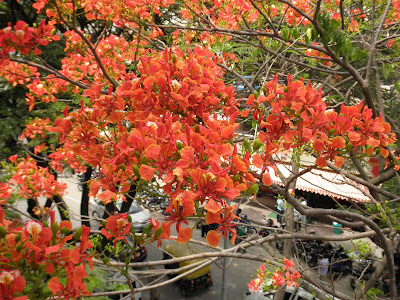 I find myself fascinated by the pods of this tree - long with perfect waves, like hair that's been perfectly styled!! I'm not quite sure what the name of the tree is. It has yellow trumpet like flowers, similar to the chestnut leaf trumpet bush and the carribbean trumpet tree. Is it the yellow snake tree (stereospermum colais) ? 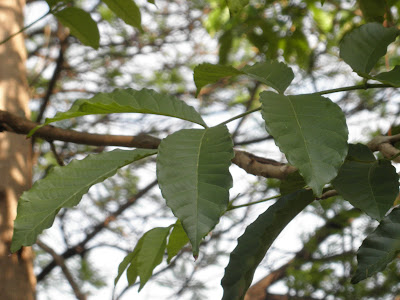 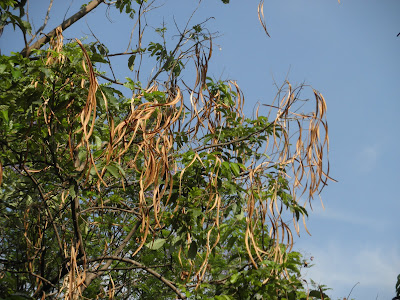 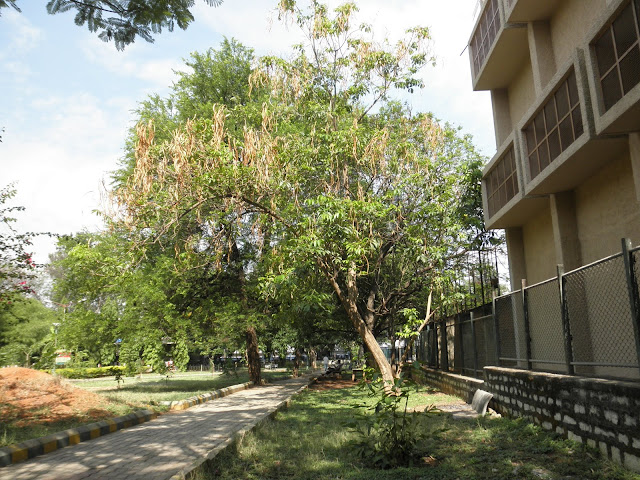 Labels: To be IDed 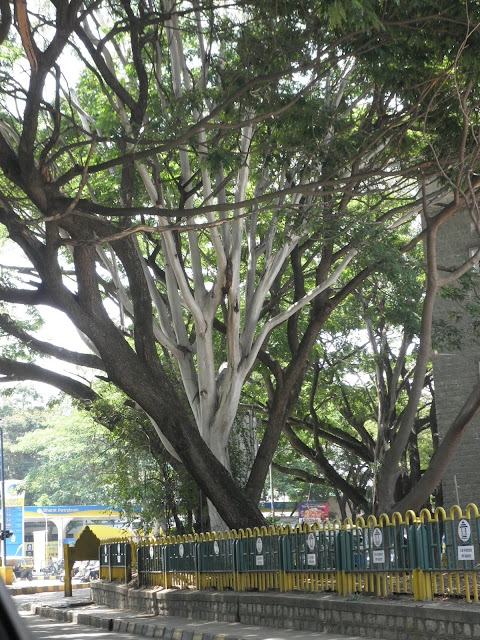 View from the balcony VI (not mine, thankfully!)

I'd love to have this tree outside my balcony 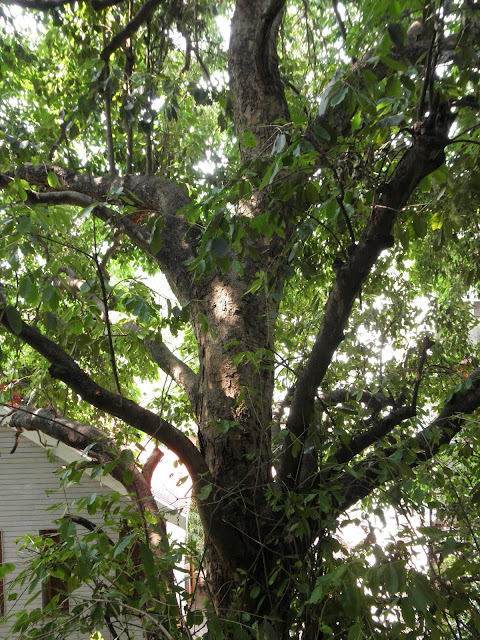 But would certainly be a bit scared of its residents!! 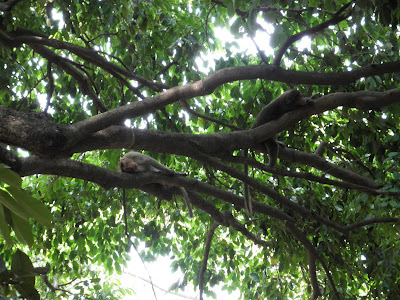 View from the balcony V 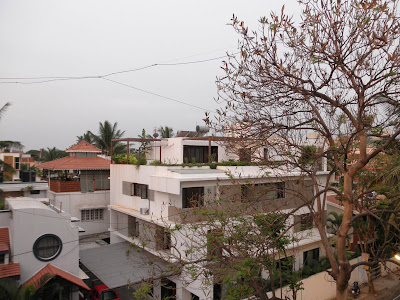 The african tulip tree, foliage- and flower-less
No comments:

Last weekend i came across this fantastic flower - white and scarlet with long 'tongues' that made me immediately wonder if it was related to the glory bower (Clerodendrum inerme). But whereas the glory bower is white with red tongues, this one had white tongues, from a red base. Enough of my feeble attempts at describing this little beauty, here are the pictures - 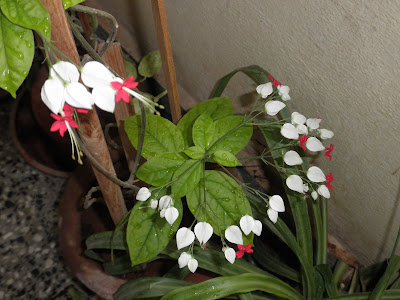 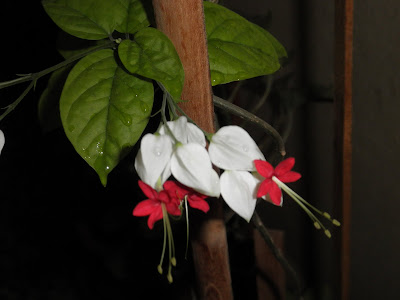 Flowers of India came to my rescue as always, and identified this flower as the Bleeding glory bower (Clerodendrum thomsoniae). Originally from west africa, this one is a climber and will hold itself up by holding on to any support it can reach. Perfect for a fence or a trellis i would think!
3 comments:

I have posted previously about Nizhal, an excellent group based in Chennai, that is actively involved in greening the city. A few months back, Nizhal embarked on a program to green the prison campus in Chennai - Puzhal.

It started out with a visit to understand the general soil conditions, availability of water and human resources for planting and subsequent care and maintenance. The extent of the site was 85 Ha, with prisons covering about 55 Ha. The site was generally flat and covered by red gravel with clayey loam. Water was drawn from the Metro water system and used for drinking and for other purposes including gardening. Nizhal proposed a water recycling project. Basic greening was carried out by planting Pungam, Nelli, Neem, Koyya, Coconut and other common species. The planting scheme included spot planting, i.e. planting of trees in specifically selected spots and row planting along the boundary walls after leaving a buffer. Cluster planting was also done in select open areas. Small patches of kitchen garden already existed. Additional patches for growing of vegetables were identified.

Nizhal also proposed the initiation of a composting program with the leaf litter and food wastes, a plant nursery, and training for the inmates in horticulture.

Nizhal's volunteers soon got to work, with the involvement of the inmates. A key volunteer was (and continues to be) Dr Babu, a marine biologist with a flair for community greening.

Within a few months the transformation was obvious! The campus is now visibly greener, with rows and rows of avarai, karamani and kothavarankai, to name a few of the vegetables grown. The prisoners have harvested 270 kgs of okra and 170kg of radish. Lots of chillies too! Horticulture seems to have taken the fancy of most of the prisoners, with several of them expressing a desire to become gardners/ horticulturists upon their release. 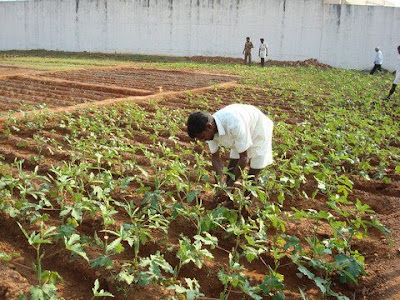