A visit to Lalbagh with the team at work 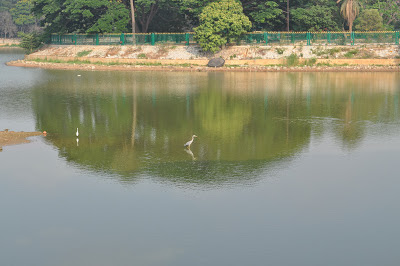 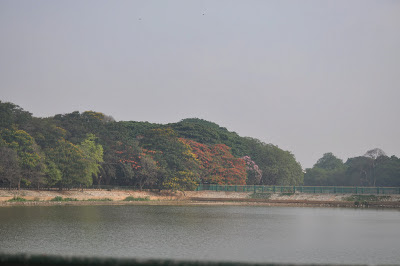 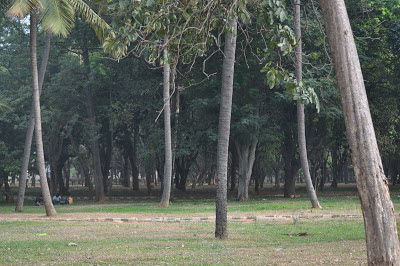 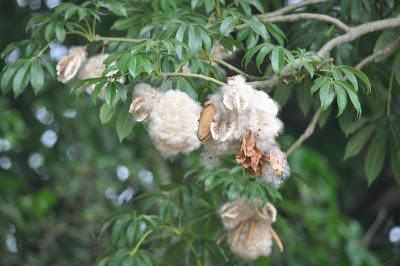 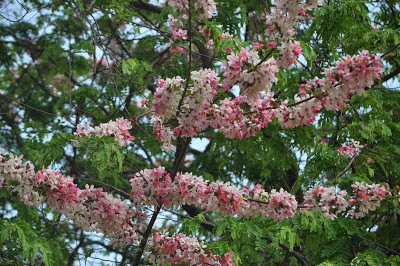 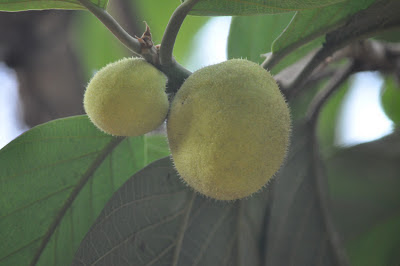 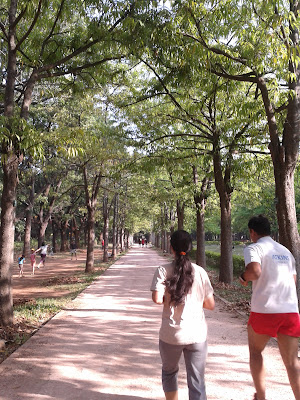 Joggers running through the path of false ashokas
No comments: Links to this post 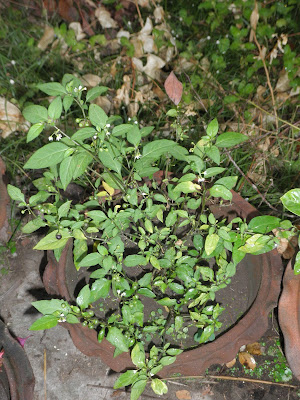 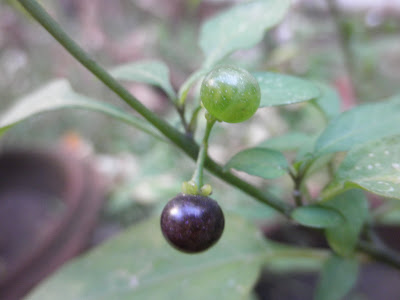 Not all berries are edible.. a bit of googling reveals that these berries might be best left alone on the plant.
3 comments: Links to this post

This tamil new year we were at Chennai and on the spur of the moment one morning we took a walk to boat club road and kotturpuram. I thought it would be nice to head to the PWD park that Nizhal was helping build and maintain. We reached there after a good long walk through the shady roads of boat club, the hot and exposed kotturpuram bridge (past hoards of birds sitting along the weeds on the adyar river) and I was pleasantly surprised ot see all the changes - the entrance itself had been rebuilt and there were pathways laid inside, with lights to help late evening walkers. There was a volunteer from nizhal busily watering all the plants , with whom I struck up a conversation.

Coming home I looked back to my posts and realized it was a good two years since I had visiting the park.. the last was on a sunday evening around this time in 2011. How time flies. 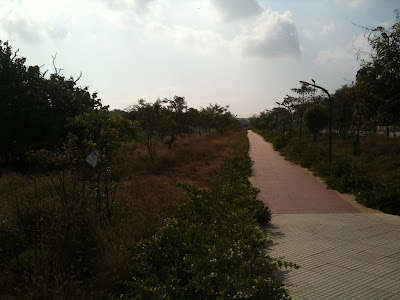 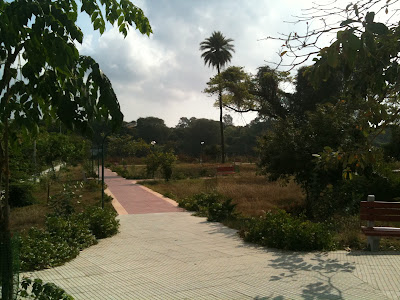 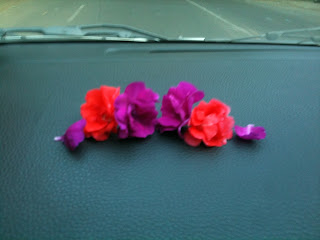 While at Chennai in April I took a few pictures of my grandmothers garden.. she does not get out much these days and it has unfortunately become quite an effort for her to go downstairs and spend some time in the garden. I thought these pictures would help her see what was blooming and how things were, to supplement what she was hearing from those who passed by. 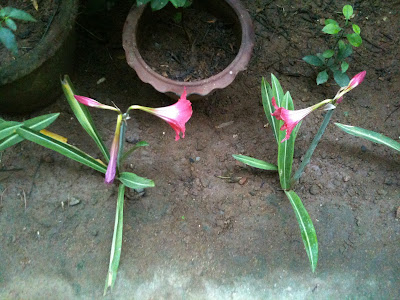 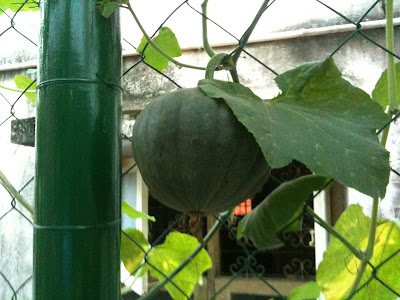 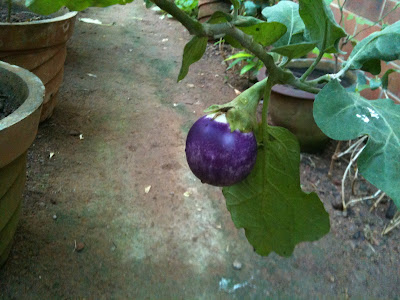 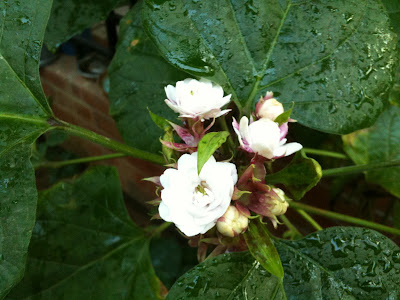 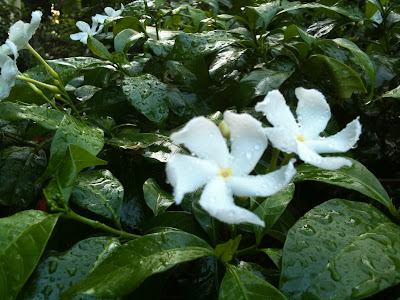 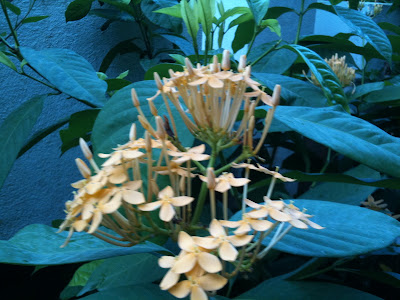 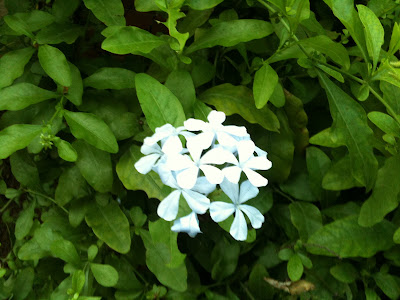 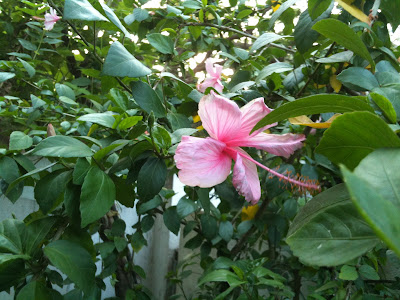 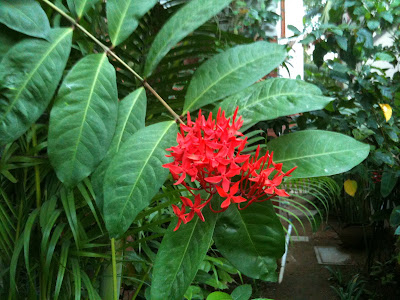 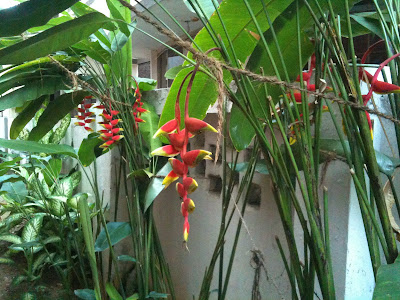 
T.T.K. Road, once an avenue of banyan trees, today has none. In Thiru-Vi-Ka Park, seven huge Trincomalee Wood trees and a large Barringtonia tree got the axe for the Metro Rail project. In St George’s Cathedral, a large and very rare Button tree was cut to make way for an exhibit centre.

We plant trees randomly but worse, we cut trees randomly, with not a thought for maintaining urban green spaces, or preserving tree species. As a result, much of Chennai’s tree wealth has been wiped out, with rare and irreplaceable trees routinely cut to make way for roads, houses or bus-stops.

A lot of this happens because botanists are not consulted before trees are cut. “Some trees can be transplanted; others can be preserved by designing infrastructure or routes around them,” says Dr. R. Pauline Deborah, professor of plant biology at Women's Christian College. The average person is not even aware of which tree is rare or really old.

Now, that could change. Over the last four years, Deborah has trudged through the city to collect images and data on Chennai’s trees for her thesis on ‘Tree Diversity in Urban Landscaping with Special Reference to Chennai’. The massive and comprehensive databank can now be used by policy-makers to preserve the city’s irreplaceable tree wealth and develop Chennai along sustainable lines.

“A map on tree cover can be used to guide planned development in the city, be it residential, commercial, educational or governmental. The Indian Constitution already stipulates this but there is no compliance,” says Dr. Abdul Razak, Professor and HoD at the School of Architecture and Planning, Anna University.

Deborah’s research includes Chennai’s tree diversity and how it has changed across the years, rare trees and their locations, heritage trees and their locations, tree hotspots, spatial distribution maps of trees, ratio of exotic species vs. native species, and much more. For instance, she found that the ratio of exotic to native trees in Chennai is 70:30, an ecologically disastrous scenario. “Exotics are suitable for a few home gardens, parks, institutions or botanical gardens. They are highly unfit for planting as avenue trees since they can easily topple during monsoons and cause fatal accidents and property damage. Moreover, exotic species can alter the water table or soil pH. Some of them can even turn invasive like the Mesquite, Muntingia and Custard Apple, posing a threat to native vegetation,” says the professor.

Architecture students are routinely asked to map trees, water bodies and other natural features of a site and come up with building designs that preserve these. During professional practice, though, this aspect is often overlooked. “To ensure compliance, it must be legalised, with the local government monitoring the construction,” says Razak.

At the very least, it requires widespread awareness creation, which is where tree data becomes invaluable. “User friendly, web-based, open-source collaborative technology that improves information sharing, communicates the value of urban forests, and engages communities in creating greener urban environments is an imperative need,” says Shobha Menon, founder trustee, Nizhal, which has mapped trees in areas such as Valmiki Nagar and Gandhi Nagar.

Deborah’s research finds that 54 tree species in Chennai are restricted to just 3 per cent of the city, and she warns, “This includes some very rare trees that exist as single trees or in small populations of less than a dozen, and they are at risk of being totally wiped out from the city if cut. For example, Gustavia Augusta Trees or Tree Lotus have beautiful flowers resembling a small lotus and are found only inside the Theosophical Society. There are only 34 heritage trees like the Baobab left in Madras Medical College. Each has a girth of about 10 m and is more than 150 years old; they need protection.”


The pity is that, thus far, tree mapping and city planning have remained largely isolated from one another. Perhaps the new databank could change this.
No comments: Links to this post 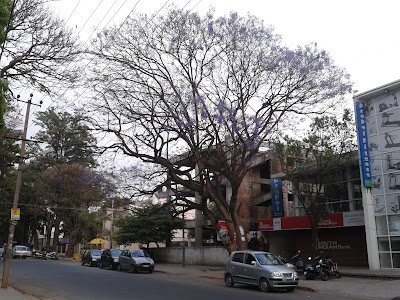 And now in April
The flaming red gulmohar 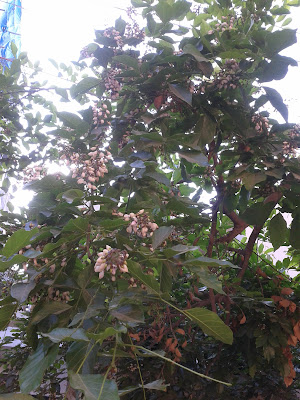 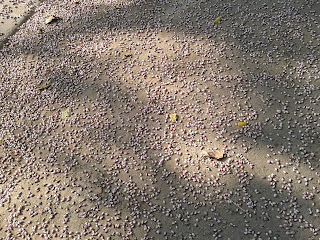 Swarms of butterflies descend on the park


From the outside, the Defence Colony Park in Indiranagar looks quite ordinary with cement chairs, cobbled stone paths and a number of flowering trees. However, the park is a visual treat inside, with large swarms of butterflies gathering as part of their migratory route.
The winged visitors are not immediately visible when you enter the park but you go a little further in, you will see the swarms of delicate wings flutter by.
The most common are the Dakhan Dark Blue Tiger (Tirumala septentrionis dravidarum) and the Double-Branded Black Crow (Euploea sylvester coreta).
The other species that have swarmed the park are the Oriental Blue Tiger (Tirumala limniace exoticus) and Indian Common Crow (Euploea core core).
This pattern of migration is seen every year with a sudden increase in the number of butterflies seen in Bangalore around March. “This is for the first time that we are watching butterflies in the Defence Colony in such large numbers. They can be seen on ground in the morning and start flying higher up by afternoon,” said Rame Gowda, a resident here for the last 20 years.
According to Krushnamegh Kunte, professor at the National Centre of Biological Sciences (NCBS) here, this occurrence seen in parks and other densely foliaged areas all over Bangalore is because of the migratory patterns of butterflies.
These beautiful butterflies migrate from the plains of south India to the southern parts of the Western Ghats before the monsoon in October or November. They then breed in the mountains and the progeny migrate back to the plains post-monsoon in March and May.
Dr. Kunte’s group is studying the effects of monsoon on the population biology of the Dakhan Blue Tiger and the Double Branded Black Crow. 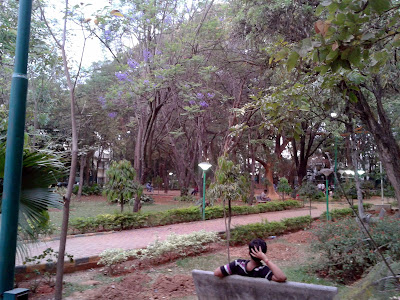 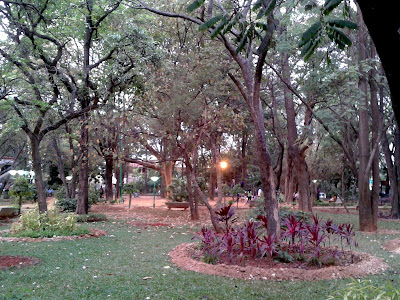 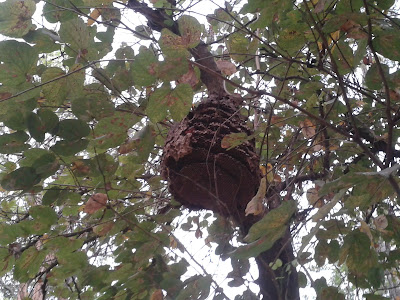 I came across this magnificent bee hive on one of the branches. It was truly amazing to see the intricate lattice pattern of this home. See if you can click on the picture and observe the details.
1 comment: Links to this post