The Neem & the False Ashoka

Can you imagine there was a time when I was not able to differentiate the neem and the false ashoka trees? Of course the way they grew and branched was very different and could be used to tell them apart, but their leaves seemed oh so similar to me. With time I realized the false ashoka has darker and longer leaves, and of course that was about when I realized it wasn't the 'ashoka' but really was the mast tree.

But what still continued to be a mystery was the flowers of both these trees. I did manage to see both, on separate occasions some years back, you'll probably find them in the 2009 chronicles of this blog. But this year is when I've been able to see them both, within a few days of each other. Now i know that while the flowers of the neem are a pale white and have a protrusion in the middle (a style? a stigma?) those of the mast tree are a light green. They are both really tiny though, very delicate looking and both prefer the end of March or early April to appear.

Here you are, the mast tree in bloom at the National Gallery of Modern Art, Bangalore. 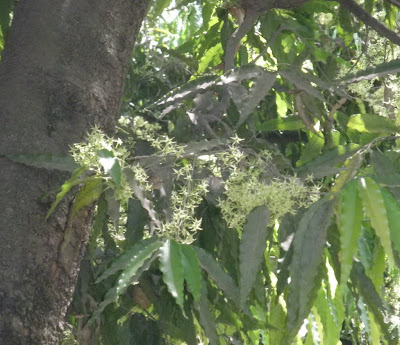 And the neem in bloom at a Jain Temple on the outskirts of Bangalore. 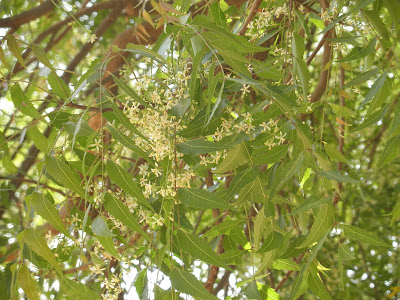 Both trees are wonderful in different ways. Did you know that the mast tree is very effective in blocking sound.

ah ok, that is probably why it is planted in a row in front of houses.