A couple of weeks back, I was invited to a dance performance at Kalakshetra. Just as captivating as the performance and the costumes was the kalakshetra campus itself .. the beautiful auditorium designed by Rukmini Devi herself and the grounds filled with a fascinating array of trees. I wrote elsewhere:
the campus was just stunning with its many trees. i would love to walk and loose myself among the leaves, trunks, mud, insects and birds...
Imagine my delight when i read the following week that Nizhal, an organization promoting urban tree culture, was planning a weekend tree walk in Kalakshetra.

We saw the growing roots of the banyan.. something i do not see too often in the banyans around the city where the roots have been damaged and they never reach the ground.

I learnt that the ubiquitous ashoka is really the false ashoka, the copperpod is not native but has been naturalized and i saw yet another lignum vitae a.k.a the tree of life.

I also saw the 7 spotted cockroach - small, black round with white spots on its body. If someone had not pointed it out and told me what it was, i would have probably mistaken it for a beetle. 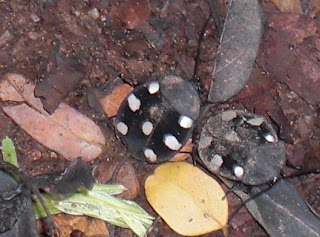 The highlight of the walk was learning about 2 species that i have seen growing wild all over the city:

the Calotropis gigantea or the Crown Flower (milkweed family)
A few days after the walk, i had forgotten the name of this omnipresent plant, but Isaac Kehimkar's 'Wild flowers of India' at a neighbourhood bookstore came in handy. The book also told me that this is the host for the plain tiger butterfly and the painted grasshopper. I will keep my eyes open! 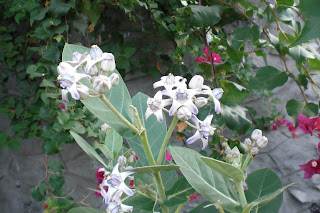 and the prosopis juliflora of the mesquite family -- the tree walk coordinator told me that this one was introduced in the '80s by the then prime minister Indira Gandhi, to green the deserts. It now grows wild and takes over all the space that it can find. An article in the newspaper, The Hindu, has more to say about the invasive nature of this species. 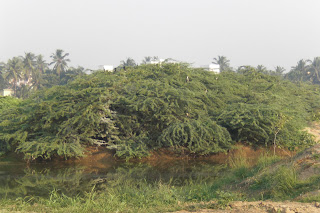 Now that i know their names, i am noticing them even more. They are everywhere!

Nizhal has conducted several tree walks in the last few months - there was one in Ashoknagar and one in Kilpauk in June/July, followed by one at the Nageshwarao park and another in the Karunanidhi park, both in the luz/alwarpet area; and as part of the madras week celebrations there were walks in the historic May Day park and My Lady Park (originally modeled after London's Hyde park). Madras week also saw a nature walk in the Pallikarnai marshes led by the Madras Naturalists Society.
To join in the fun, write to NizhalTreeWalks@gmail.com