'Free the Tree Campaign' in my neighbourhood

The neighbourhood gang got together this morning at 6:30, armed with hammers, wire clippers, camera and turmeric-soil paste and decided to work on one stretch of a main road. The group split into two and covered both sides of the road. An hour and a half and tons of nails were removed from the trees - the most from the ones in front of a Sony World (20+ nails!!) and a Coffee World. We intend to go speak to the management of these two places and see if we can get them to protect these trees from nails/ads in the future.

Students from the neighbourhood were keen to come but unfortunately could not because of exams next week.

And to those from other parts of the world who are wondering why there are nails on the trees - it is common practise for small (and sometimes big) businesses to nail or hang their advertisements and banners on trees. Despite the corporation issuing a notice banning this practise, it continues, thanks to the lax attitude of the officials and lack of awareness of what this does to the trees. Nizhal, a local organization promoting tree culture, gathers its volunteers in various neighbourhoods and sets out on Free the Tree Campaigns (FTCs), where they remove the banners and nails, spread awareness among the residents and educate the offendors.
The area that we worked on today was 'clean' - no banners on the trees, but the old nails remained. 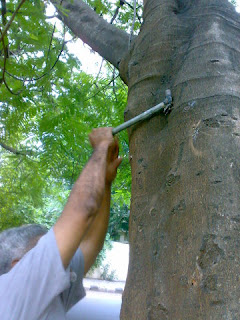 The plan is to meet again next weekend and work on the rest of the road.

I was particularily exhilarated as it was my first ever FTC! I had been waiting for one to happen in my neighbourhood, but soon realised that the best thing to do was to make it happen! Was a bit apprehensive yesterday when i sent out the mails/smses/calls to Nizhal volunteers in the neighbourhood - some of whom I'd never met, about what the response would be to such a last minute call, but everyone was so ON about joining, i'm so glad i did! here's to many more such initiatives in the neighbourhood. 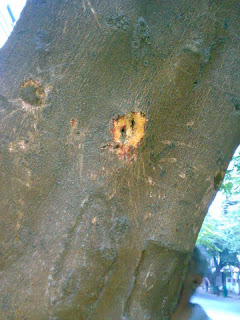 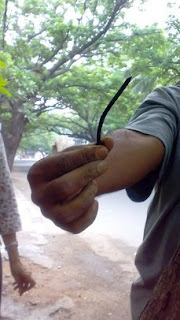 This one on the left was one of the biggest nails.

Removing the nails sometimes left gaping holes - we put a soil + turmeric powder paste into them to help the trees heal.

Good work Arati! This is a pet dislike of mine too! Nice blog too!

Good work. Nature is so valuable, specially trees. It is interesting to see how different activists differ. Many of my friends were tree protesters living on site and in the end locking onto trees ad living on platforms in the trees to prevent them from being chopped don to make way for ineffective road bypasses. In those days, some activists would be the ones placing nils in the trees. But this was to thwart the machinery of the road crew and an attempt t prevent the trees being felled.

@Russell - thanks, dont tell me tree ads are common in your neck of the woods as well?!

@Jasmine - that's interesting. i read somewhere that the authorities here sometimes try to be nice and transplant the trees instead of chopping them down to make way for city infrastructure - i wonder if any of them survive.

very interesting about the curcumin in the nail hole. I once had a winter squash that got a big bug bite on it. I thought it was ruined so I stuffed the little hole with mud and it healed it and the squash reached maturity. Gloria

I came via the tree festival and this is such a wonderful idea...I will have to take a look at the trees near our home....Michelle

If there is a gum like secretion which could lead to fungal infection getting a foothold, it is adviseable to use a fungicide such as Bordeaux mixture. If you have nothing at hand, Choona (lime) is better than turmeric.